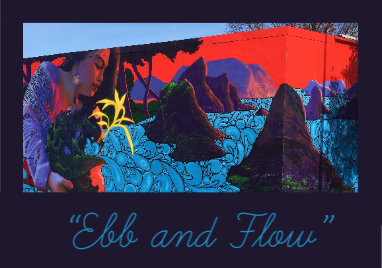 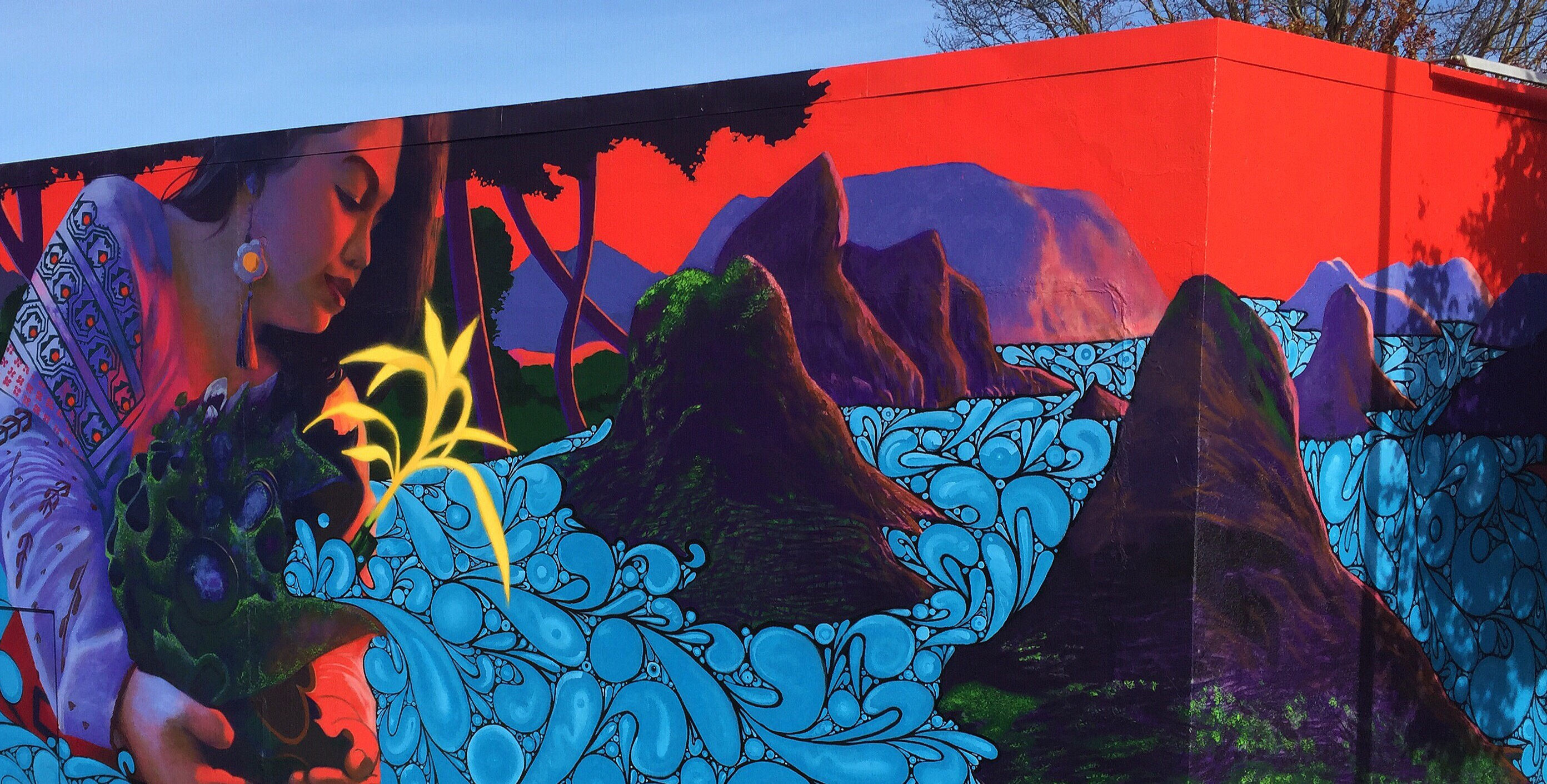 Two murals within a two-block area of 98144 bring beauty and timely messages of hope to the Rainier Valley.

In 2016, hyper-local artists Ari Glass and Craig Cundiff began what would become a two-part mural project between South McClellan and South Forest streets. With the help of Mt. Baker Hub Alliance, a vibrant and colorful painting on the south wall of the O’Reilly Auto Parts building has grown into a multi-wall mural that extends to the south and east walls of the Cash America building next door.

The now three-wall mural, entitled “Ebb and Flow,” is intended to be a reminder of the elemental forces of nature in this world that’s “hectic and overwhelming” from a technology standpoint, said Cundiff.

“We often look to nature for answers to create a better community and world,” said Cundiff. “It is imperative that we can find focus by relating to the simple and elemental forces of nature. By meditating on these forces, we can find meaning in how we see our place in the world.”

For this mural, the artists wanted to “transport the viewer to a place that feels like a natural wonder,” Cundiff told us. 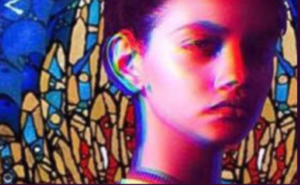 The first mural, or “part one,” as it were, covers the south-facing 2000-square-foot wall of the O’Reilly building largely in a blue paisley motif, painted by Glass, with intermingling azure teardrop shapes in different sizes. In conjunction with the long, narrow wall, the shapes create something of a tributary that runs between Rainier Avenue South and the alley behind the building that connects the auto parts store to Thai Recipe restaurant.

Featured prominently in the mural is a portrait of a young woman, painted in a unique CMYK, double-exposure style that creates a blurry effect. The figure is outlined in light blue, magenta, yellow, dark blue, green, and red that call attention to her face and solemn expression, despite the business behind her. She stares keenly at the viewer, surrounded by stonelike segmental arches. Molten-red fingers of space between the arches frame her face at the shoulders.

On November 11, 2018, Mt. Baker Hub Alliance and artists Glass and Cundiff introduced “part two” of Ebb and Flow to the community. Adjacent to the Artspace Mt. Baker Lofts, where Glass and Cundiff live and work, the new mural is not physically connected to its sister mural, but in just about every other way, the two are one. 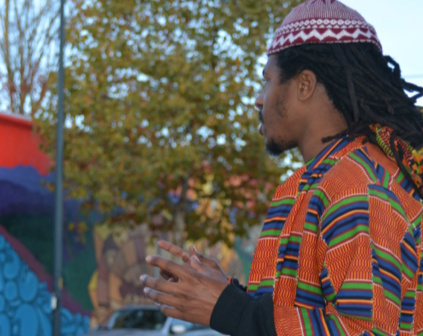 The freshly-painted 4,000 square feet of the south and west outer walls of the Cash America building, just south of O’Reilly Auto Parts, incorporates the river-like “flow” of the blue paisley motif and takes the water representation one step further.

The new mural features a human figure, as in part one of Ebb and Flow. A woman with long, dark hair pours a pitcher of the curly tear-drop shapes that pattern the first mural out of a large seashell. The flowing blue shapes wind around moss-covered rocks. Behind the goddess-like figure, a tropical sunrise of deep blood-orange peeks through trees with thin, leg-like trunks. 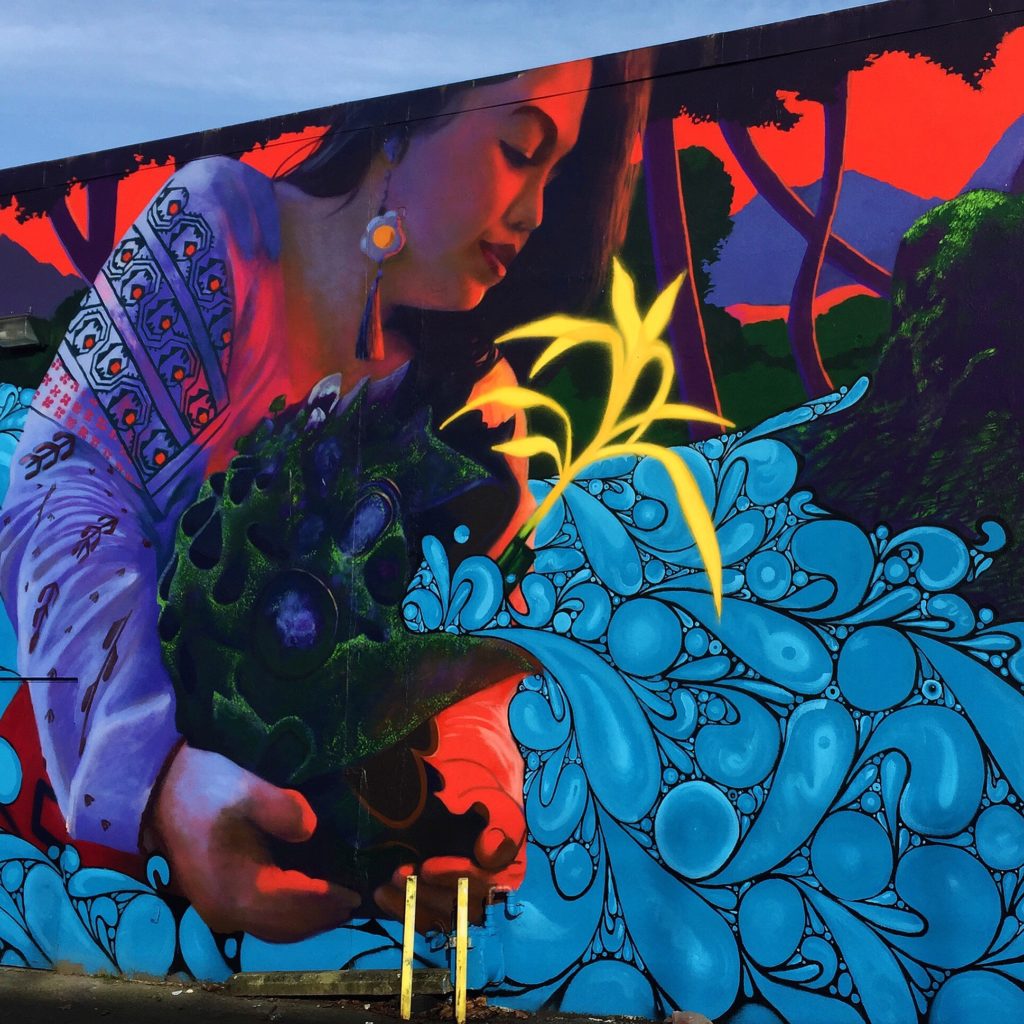 Cundiff explains that the two main figures in the murals tell the story of a “matriarchal society that returns to nature and cherishes the power of the feminine.” He went on to say that, “Just like a parent’s love, the flowing water invokes our endless capacity to give.”

The water sustains the life in the mural, Cundiff said, meeting obstacles as it flows out from the pitcher, a “humble contribution” from the matriarch. The massive shark-tooth-like rock formations attempt to halt the flow of water, but “the harmony of nature allows the water to find its way through” to a “vision of Utopia as seen through the lens of a child’s imagination.” 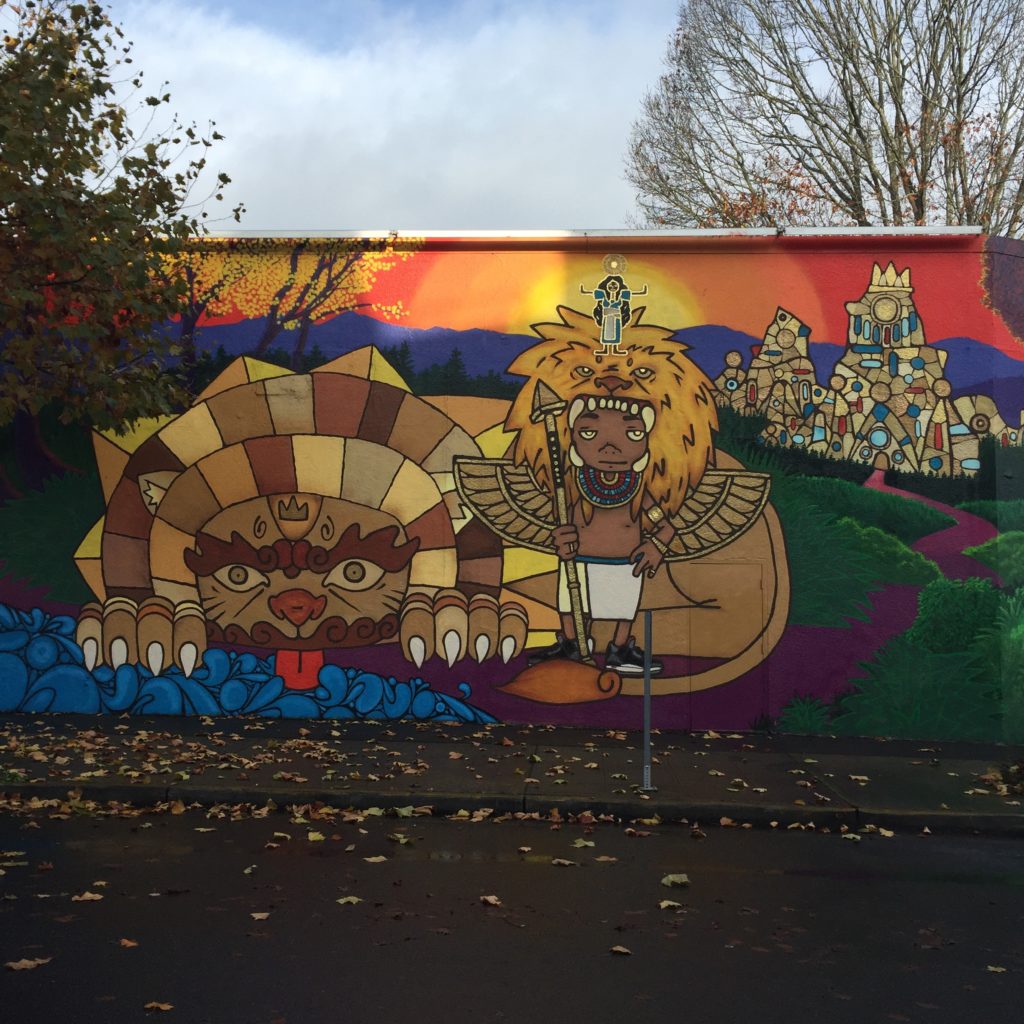 As the mural wraps around the south side of the building, we find a scene that depicts a small tribal soldier of a sort (perhaps a child king) holding a spear as tall as he is. He stands proudly in the foreground, a stone city in the distance behind his left shoulder. He poses with a large stylized lion, his pet, said Cundiff, who is lying in rest on verdant earth. Cundiff explains that the “larger than life” creature acts as the boy’s guardian, “adding to the feeling that he is safe to thrive in this world.”

Ebb and Flow is one big message to the community: you are safe to thrive here. There is strength and balance here among us and in the nature that surrounds us. Imagination is free to flow and we are free to create and thrive in this, our community.

Cundiff and Glass are two new parents and as such, Cundiff said, “We wanted to create a mural that inspires children in our community to place value within themselves and think about how they connect to the larger river of life.” 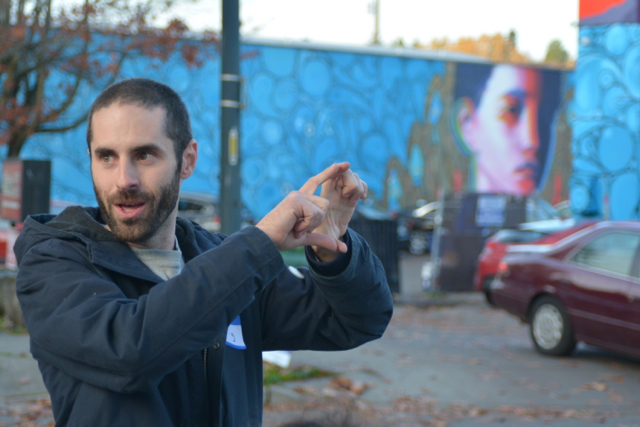 They also wanted to promote their shared worldview that “strives to give power back to a feminine energy.” By trumpeting these values, Cundiff says, “we can begin to heal and move forward as a society.”

Much thought and heart went into the planning and creation of these murals. One impressive tidbit to come out of the planning phase—a genius and well-executed artistic design feature by Glass and Cundiff—is that when viewed from above, notably when riding Link light rail between the Mt. Baker and Beacon Hill stations, at just the right moment: the murals appear to become one long image.

These murals emerge from a sea of asphalt and concrete—which we have an abundance of in the Valley. They’re lovely, brightly-colored, but more notably, emotionally evocative. Surely, these images mean different things to each onlooker, but without a doubt they make people feel something, pique curiosity, and promote imaginative, intellectual thought in passersby of every age and background.

Besides being beautiful and promoting thought, this gorgeous art project had a not-entirely-unexpected but still impressive side effect: in the two-plus years since its completion, the owner of the building, Joseph Velling, says there has been no graffiti on the formerly oft-defaced wall.

That’s actually how the single mural became two. Cash America manager Mohammad Ahmed told us that he’s seen how the neighborhood has changed for the better over the years since he first started working at the location and that the murals play an important role in that. It was his idea to reach out to Glass and Cundiff to discuss adding a mural to his building. Though the building is owned by Joseph Velling, who also owns the O’Reilly Auto Parts building, he had to go through proper channels to get the ok from the Cash America corporate office to paint the building. Fortunately, he made a good case, explaining that the painting on the auto parts building—which is prominently visible from the front door and parking lot of his shop—lends an air of friendliness, and its clean (both buildings used to get tagged regularly).

Ahmed told us that the murals, “totally bring a different perception of the district” to community members, noting that his clientele has changed. He says he still has his regular customers, but now he also sees families coming in with their children. People feel safer to shop there now.

Mt. Baker Hub Alliance was approached and helped to fund the second mural once all parties were on board and we saw the projects through to completion. Soon we’ll mount a plaque to give cred to the artists and let people know how these murals came to be.

Folx on a tour of the completed “Ebb and Flow” murals. A sneak peek of the water buffalo mural on Ho Mai Preschool is on the left. (You can see its full glory on our homepage!)

Murals and other community-driven art projects, as well as events, contribute to the overall health of a neighborhood, help strengthen its identity, economy, and more and Ebb and Flow is not the only art project beautifying the area and bringing people together toward common goals of enriching their beloved communities.

At almost the same time that Ebb and Flow was being finished and revealed to the neighborhood, a group of astute, social- and environmental-justice-minded, artistically talented Franklin High School Students were completing and installing their own multi-panel, 40-foot mural across the street on the next block. 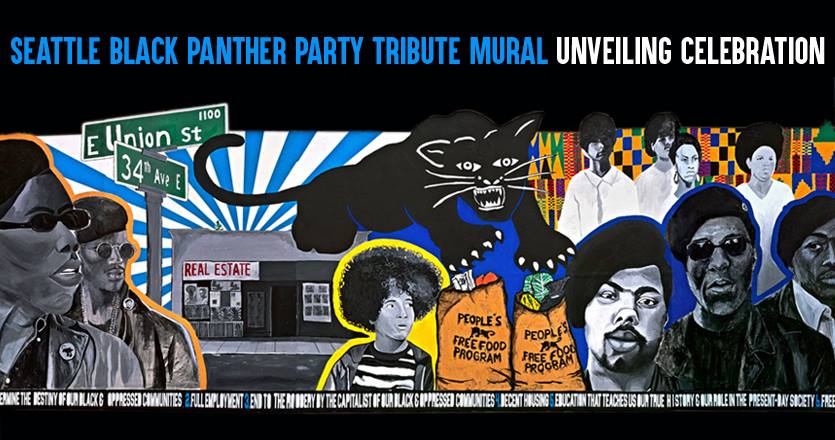 To celebrate the great work of, and commemorate the 50th anniversary of, the Black Panther Party (Seattle Chapter), Art of Resistance and Resilience created their mural and unveiled their own massive and thoughtful art project in the same corridor just two days before Mt. Baker Hub Alliance hosted the big Ebb and Flow “Mural Reveal” party.

The Ebb and Flow Mural Reveal party also served as an official meeting of the Mt. Baker Hub Alliance, which helped to organize, get the funding, and facilitate the Ebb and Flow project. The meeting and mural unveiling and celebration was attended by the artists, who gave a tour of the murals, bringing artists and community together to discuss the project and the neighborhood. 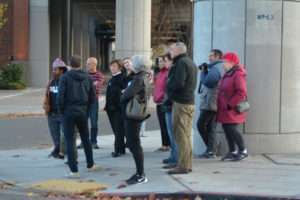 Ari Glass and Craig Cundiff take community members on a tour to look at the completed “Ebb and Flow” mural project at the Mt. Baker Hub Alliance annual meeting

These gorgeous murals marry perfectly with the water buffalo painting that hangs along the Rainier-Avenue-facing fence around the outdoor play area of the Ho Mai Vietnamese Bilingual Preschool. It was created at the 2016 Hubfest by another hyper-local artist, EMANATE. She painted it in sections and it was mounted by parents of Ho Mai preschool students.

There’s yet another new mural on north side of ASM Direct Mail (next to Saigon Printing) on S. Byron at Rainier on the north-facing wall. We’ve reached out to Ed Tan, owner of ASM Direct Mail to learn more about this project and will update this post when we know more.

Community murals connect people, and they connect people to place, strengthening the foundation of the community as a whole and driving opportunities to connect needs with those who can fulfill them. In the case of Ebb and Flow, your local nonprofit community business association, Mt. Baker Hub Alliance, worked with a property owner, management and staff of local businesses, residents, and artists who live right here in the Rainier Valley. This beautiful synergy is what an organization like ours strives for and we couldn’t be happier with the results of this, our most recent endeavor to enrich the community through the arts.

Watch this cool video about Ebb and Flow (below) shot by WTIA Ion Collaborators with funding from Seattle’s Office of Economic Development. Shout out to Phillip Sit from the Ion cohort who reached out to us to collaborate on this video project! You can also watch a longer conversation with the artists video here.